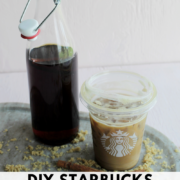 Learn how to make a Starbucks copycat brown sugar syrup at home. It's the perfect coffee syrup to add to any cold brew, iced coffee, or espresso and takes under 5 minutes to make.

If you've been wondering where to buy Starbucks brown sugar syrup or haven't been able to source the product, this is the perfect solution! Try making a homemade version of this simple syrup so you have it on hand at all times.

I've been loving the flavor this copycat recipe brings to my homemade cold brew coffees and espressos. It adds just the right amount of sweetness that blends perfectly with so many drinks.

What You'll Learn In This Recipe

In this recipe, you'll learn the basics of making a simple syrup at home. Simple syrups can be used in all kinds of cocktail and coffee recipes.

Typically, simple syrups are a one to one ratio of sugar and water. For this recipe, we're adding a little twist with maple syrup and a little less water than usual.

However, the same basic cooking method can be used for any other simple syrup recipe you make!

What Is Starbucks Brown Sugar Syrup?

Brown sugar syrup is one of Starbucks newest simple syrup flavors. This simple syrup is used in the ever-popular Iced Oatmilk Shaken Espresso and many TikTok original drink creations. It would also be delicious mixed with sweet cream cold foam.

The ingredients listed on the bottle are a little vague: invert sugar, brown sugar, water, natural flavors, salt, and preservations. However, when you taste this delicious syrup, you'll get hints of brown sugar, maple syrup, and cinnamon.

While brown sugar syrup is usually available at Starbucks, it can be expensive to purchase an entire bottle to use at home. This recipe is a copycat version - I swear you won't be able to taste the difference - and you can make it at a fraction of the price.

Here's everything you'll need for this recipe:

How To Make This Recipe

This DIY syrup can be whipped up in under 5 minutes. Here's how!

3. Transfer the simple syrup, along with the cinnamon stick, to a reusable bottle that has been sterilized. Allow the cinnamon to steep in the syrup for 24 hours at room temperature.

After 24 hours, remove the cinnamon stick. You can use the syrup immediately, or store it in a sealed bottle in the refrigerator for 4 - 5 months.

No. When you taste the Starbucks brown sugar syrup by itself, it has notes of brown sugar, maple, and cinnamon. It does not taste like it's exclusively made with brown sugar.

For my original recipe, I've added these other ingredients to best replicate the flavor of the Starbucks syrup.

What brown sugar does Starbucks use?

From tasting the Starbucks brown sugar syrup by itself, I don't believe that there is a special type of brown sugar that Starbucks is using. Instead, I believe they have additional flavors such as maple and cinnamon included in their recipe.

For my original recipe, I've added these other ingredients to best replicate the flavor of the Starbucks syrup.

How long does brown sugar syrup last in the fridge?

If properly stored in a sterilized bottle that can be resealed, the syrup should last in the refrigerator for 4 - 5 months.

If you enjoyed this recipe, try other coffee-related recipes like: 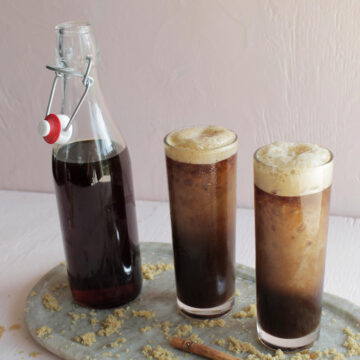