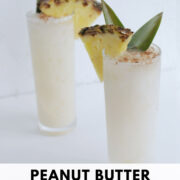 Shake up a tropical tiki cocktail (in under 5 minutes) using peanut butter whiskey along with summer flavors like rum, coconut, and pineapple. At the first sip, you'll experience a sweet coconut flavor with a peanut butter note at the end.

If you're looking for a summer tropical cocktail, you have to try this coconut and peanut butter whiskey drink. I love the bright and fresh flavors found in tiki-style cocktails, and I wanted to bring a new twist by adding Skrewball.

The cream of coconut and pineapple juice blends seamlessly with the bitter notes of Skrewball whiskey. This recipe is the best of both worlds blending sweet, fruity, and aromatic bitters.

What You'll Learn In This Recipe

I've got a few bartender tricks to teach you by making this recipe:

For other bartender tips and tricks, check out my Liquor 101 series on YouTube.

How To Make This Recipe

Once everything is in the shaker, shake the cocktail vigorously until the drink is chilled.

2. Strain the drink with a Hawthorne strainer into a chilled highball glass over pebble ice. This cocktail is really easy to make!

3. Finally, it's time to garnish the cocktail. Add a shake of cinnamon, some pineapple fronds, and then a slice of pineapple.

Does it matter what brand of peanut butter whiskey I use?

No, any brand will work. Feel free to use whatever is available in your area. My personal favorite is Skrewball.

Sure! It will give the tropical whiskey cocktail a different flavor profile, but it will still taste delicious.

The cocktail is too sweet for me. What can I adjust?

First, I would add less cinnamon simple syrup to the cocktail. You could also add a few more dashes of aromatic bitters for balance.

Looking for more drinks to make with Skrewball whiskey? Try some of my other favorite recipes: 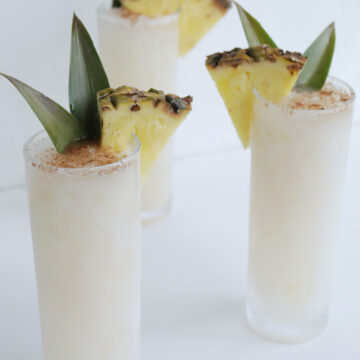 To make homemade cinnamon simple syrup add ½ cup granulated sugar and ½ cup water to a small saucepan. Place over medium heat and stir until sugar is fully dissolved. Remove from heat and add in 2 cinnamon sticks. Allow cinnamon sticks to steep for at least one hour, up to 24 hours. Pour into a glass jar and seal tightly. The simple syrup will keep for 1 month in the refrigerator. Want an extra cold cocktail? Place the highball serving glasses in the freezer for 30 - 45 minutes before mixing up this tropical whiskey drink.