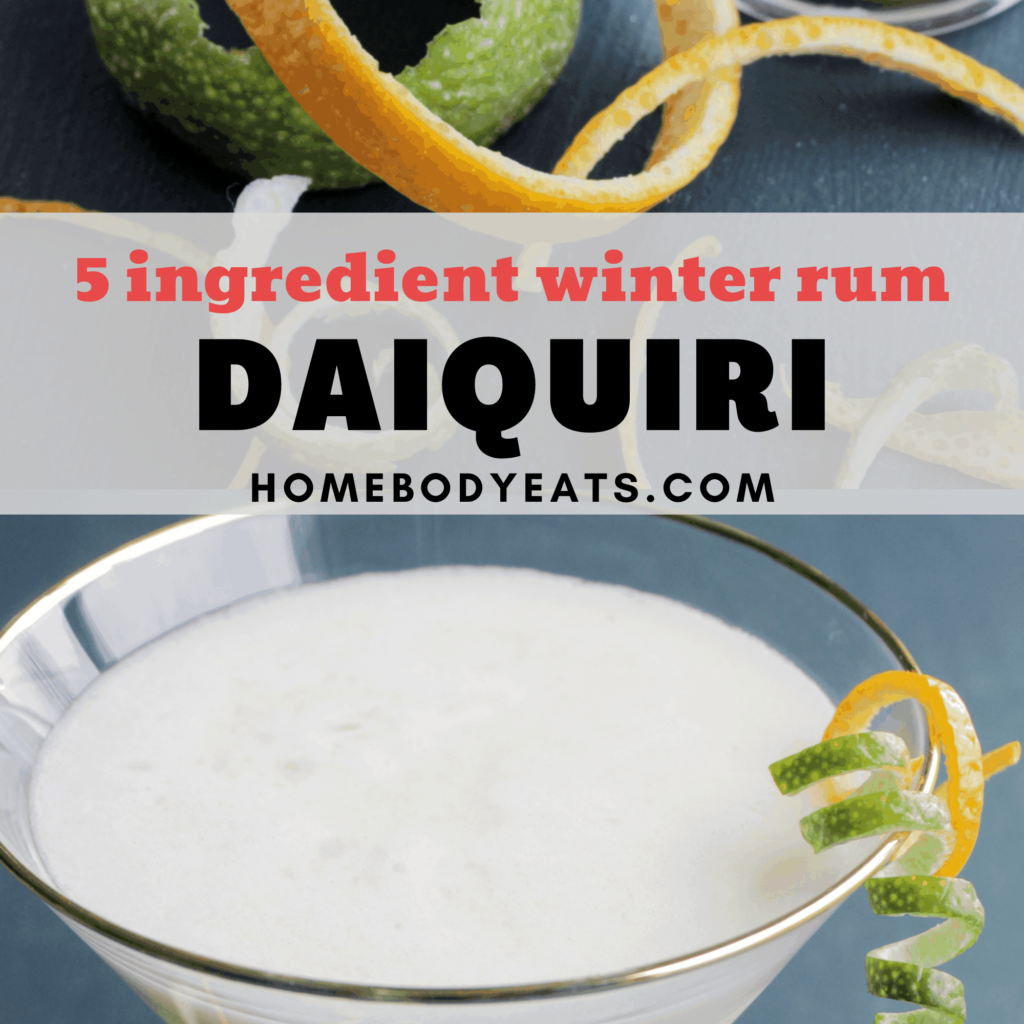 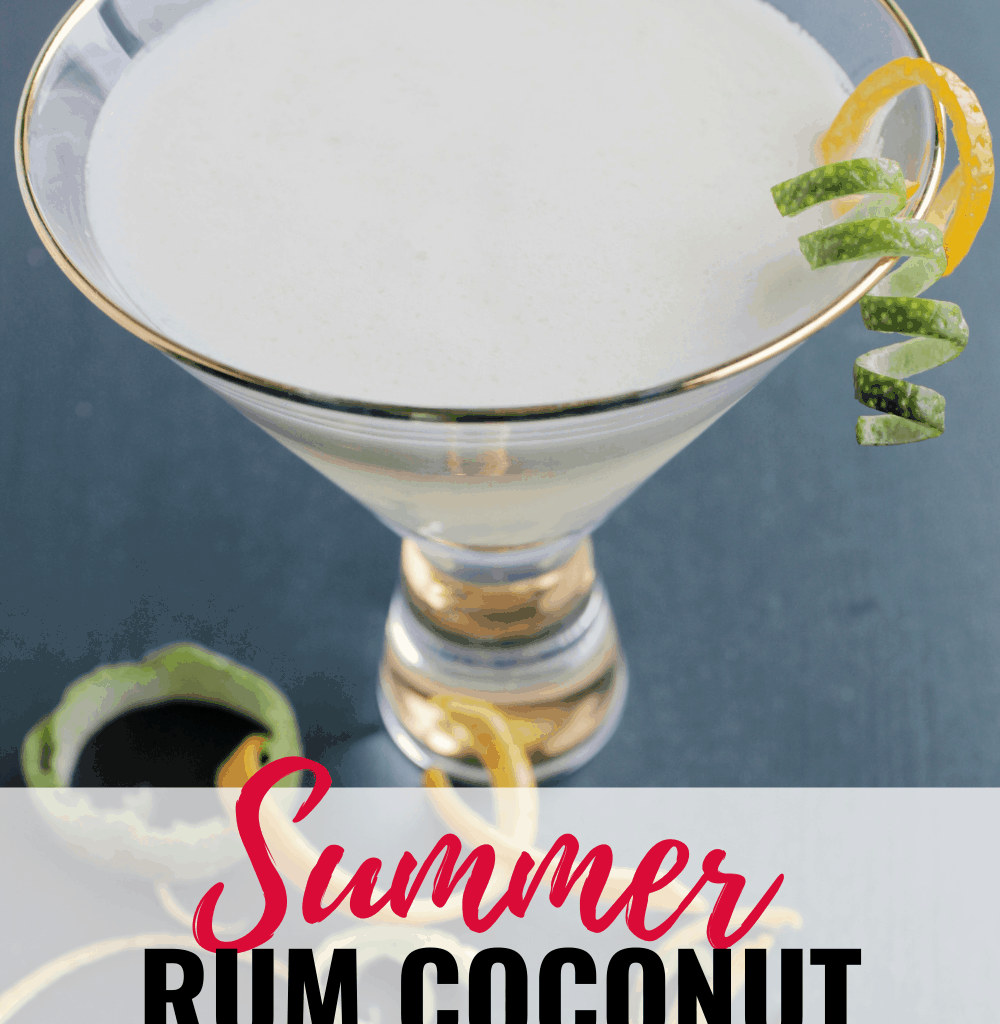 Mix 5 ingredients to make a coconut rum daiquiri (classic or frozen), and learn the in's & out's of rum.

This coconut daiquiri - whether you drink it classic or frozen style - is the ultimate rum cocktail! This simple, 5 ingredient cocktail is made with white rum. It's perfect for a hot summer day, or a beautiful white holiday cocktail. Coconut and rum is a classic combination and blends together beautifully in this cocktail. And don't forget the twist with a secret ingredient...some freshly squeezed orange juice.

This post may contain affiliate links, which means I’ll receive a commission if you purchase through my link, at no extra cost to you.

Let me tell you what I love...sipping on a coconut daiquiri made with a delicious white rum and day dreaming that I'm sitting on beach. I mean come on, that's the life! Don't worry about the fact that we're dead in the middle of winter.

To get us through a long winter, you're going to need this coconut daiquiri! It's made with freshly squeezed lime and orange juice, coconut milk, and of course your favorite white rum!

This post goes along with our cocktail video series where I teach you the basics of liquor. The goal of this series is to get you more familiar with the basic in’s and out’s of common liquor (how it’s made, how to buy a bottle you’ll like, and how to make mixed drinks with it). By the end of the series, you’ll be a pro at mixing up fun and inspiring drinks in your home bar. Be sure to follow along on YouTube!

What I love about this rum drink is the versatility it has! Whenever I make cocktails (you can check out all the recipes here), I love being able to use the same drink recipe for various needs. Let me show you what I mean!

You could easily make this drink during the summer, just make the frozen version in the recipe notes.

Or, you could add some beautiful sugared cranberries as a garnish and use this as a classic and timeless holiday or Christmas rum cocktail.

You could also try swapping out the white rum for some gold rum. I haven't tried this yet, but let me know how it tastes!

There are endless possibilities! Just use your creativity and imagination and you'll be off to creating amazing cocktails. Just be sure you have a few standard bar tools at home to help you with the job!

Also, if you love these glasses as much as I do, here are some similar options. These are literally my FAVORITE cocktail glasses I own. They're so fun and definitely add a bit of spice to the presentation.

And now, because I want you to be able to make your own versions of your favorite rum cocktails, I thought it would be good to do a mini dive into the world of rum. You can also check out the video where we go over all things rum!

A (super brief) History of Rum

When it comes to learning about rum, history really plays a big part in this discovery of this spirit. As it starts, sugarcane was brought over to the Caribbean through Christopher Columbus' journey to the New World. Unfortunately, during this dark time in our history, slaves were expected to do the hard work of harvesting all of the sugarcane so it could be turned into sugar and shipped/sold to Europe.

Slaves were the first to discover that molasses could be fermented into alcohol. Later, people started to distill the mixture and that's how we have the rum we all know and love today.

Once rum gained popularity in America, the British caught wave of this and they put a tax on sugar, meaning rum was affected by this tax. This, along with the rise of American whiskey led to a short decline of rum. That is until the 1930s when "tiki culture" began to pop up in bars across the U.S., thanks to a popular Polynesian-themed bar in Hollywood.

Essentially, rum was born from trash. Let me explain a bit more.

Rum comes from the byproducts of sugarcane. Meaning, once the sugar is made from crushing sugarcane, there are leftover sugar juices from this process that once boiled, turns into the byproduct of molasses. From there, the molasses is fermented using yeast, distilled, allowed to age, and you have rum. Pretty cool, huh?

I should also mention that rum does not only have to be made from molasses (although most rum is). The sugar in rum can also come from sugarcane juice or cane syrup depending on the type of rum.

Another fun fact about rum is that it's produced in almost every developed nation. However, according to Thrillist, these are some of the places where the world's best rum comes from:

With so many different countries producing rum, there are various styles, techniques, and traditions when it comes to the production process. In fact, rum is one of the most diverse spirits out there! So, let's talk a little bit about what affects rum's taste.

First off, the type of barrel the rum is aged in affects the final flavor of the spirit. Rum can age in anything from charred oak barrels, to previously used whiskey barrels, or even sherry casks.

The climate also affects the taste of rum. With much of our rum being produced in very hot climates, like the Carribbean, the liquor ages a lot quicker. This is due to the fact that much of the spirit evaporates quickly in the hot heat, leaving the spirit that's left to soak up the flavor of the barrel. The longer the spirit ages in the barrel, the heavier body and flavor the rum will have.

Additionally, the still used in the production of rum as well as the yeast changes the flavor of the rum.

As you're soon going to learn, rum comes in many different styles, even more than most other spirits. Because of this, it makes it hard to give specific restrictions for each type of rum (unlike the tight restrictions for tequila or whiskey if you've been following our liquor basics series).

Here are some of the most popular styles of rum:

Light rum, sometimes referred to as white or silver rum, is usually clear and has a lighter-bodied flavor. They are sometimes aged in oak barrels and then filtered to remove any color or impurities.

Light rums typically taste less pronounced than other rums due to the filtering of the spirit.

Popular drinks include the mojito, daiquiri, piña colada, or many of the other drinks served with those cute, small umbrella garnishes. You can also layer white rum with another stronger flavored rum for a mixed cocktail. This is the rum we're using for our coconut daiquiri!

Gold rum is traditionally aged but doesn't necessarily have to be. If it is aged, the flavor tends to be richer from the barrel it was aged in. Usually, however, the gold color comes from caramel coloring.

Gold rum usually has a more medium-bodied taste. Since these types of rum are generally not overpowering, gold rum could replace light rum in a cocktail.

Popular drinks include blended drinks similar to the ones made with light rum like mojitos, rum punch, or hurricane.

Dark rum is know for being full-bodied and well-aged in barrels. These types of rums tend to have a more intense flavors. Black rum could also fall under the dark rum category. Black rum, however, has added molasses that helps darken the final spirit and makes it sweeter.

Dark and black rum tends to have a stronger more intense flavor, most similar to the taste of a whiskey.

Popular drinks include the Dark 'n' Stormy, as well as simply sipping the rum.

You can probably guess from the name that spiced rum is flavored with spices such as cinnamon, cardamom, pepper, cloves, vanilla, etc. Different combinations of spices are used depending on the brand.

The taste of spiced rum can range from a bit sweeter than normal rums, to having a little heat and complexity from the various spice blends.

Popular drinks include rum & Coke or mixed drinks that have a fruity or citrus mixer.

Rhum agricole (yes, it's spelled correctly), is the one type of rum that's a little bit more strict when it comes to the production of the spirit. This type of rum is made only from fresh sugarcane juice (not molasses) and distilled to 70% ABV. This is a specific style of rum from the French Caribbean islands.

The taste of rhum agricole can vary as it comes in white, gold, dark, etc. and carries various flavors.

Overproof rum refers to any rum 50% ABV or higher. There are two types of overporoof rum. Navy rum, with a 57.5% ABV (the name “navy rum” comes from when a rum ration was given to sailors on Navy ships) and 151 rum with 75.5% ABV.

These types of rums are often used for the flame you see on Tiki drinks, as they are highly flammable.

What to Look for in a Bottle of Rum

When it comes to finding a bottle of rum you'll love, it can be hard to tell the quality of rum just from the bottle. And that comes from the fact that details aren't always included on the label. For example, it's not always easy to tell where the rum was aged, or even how long it was aged.

Let's dig a little deeper. Different aged rums are often blended together to form one bottle. If there even is an age listed on the bottle, it's always the youngest aged rum that was used in the bottle. Meaning, it's not always the best indicator of how a bottle will taste since it's a blend.

So here are some general rules to go by when choosing a bottle of rum. Go by the styles we talked about above, as well as the typical flavor profiles of each rum. You can also do research on a specific brand and their process for producing rum.

If you're looking specifically for a bottle of rum from the Caribbean, you can look for an Authentic Caribbean Rum symbol which was created so customers could identify a true Caribbean rum that was made with consistency and exceptional quality.

Coconut Daiquiri with a Twist

This coconut daiquiri - whether you drink it classic or frozen - is the ultimate rum cocktail! This simple, 5 ingredient cocktail is made with white rum. Coconut and rum is a classic combination and blends together beautifully in this cocktail. And don't forget the twist where we throw in a secret ingredient...some freshly squeezed orange juice.
5 from 1 vote
Print Recipe Pin Recipe
Prep Time 5 mins
Total Time 5 mins
Course Drinks
Servings 1

For a frozen daiquiri, blend the above ingredients, along with 1 cup of ice, on high until smooth.
Have you tried this recipe?Tag @homebody.eats on Instagram so we can see your creations!
Yum

A brief video on the history of rum - super interesting!

Of course, you'll want to know how rum is made.

I'm obsessed with the Tipsy Bartender, so I have to include his ultimate rum guide on this list.

The five biggest rum myths is a cool article to check out!

I really like how this article breaks down how different regions make your rum taste. I know you'll recognize a lot of the brands in this article.

P.S. If you made this coconut daiquiri cocktail with rum, share a picture with me on Instagram using #HomebodyEats. I love seeing your creations!!

You May Also Enjoy:

How to start a food blog →